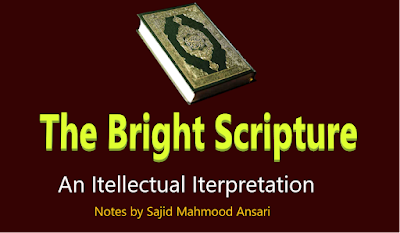 اعوذ باللہ من الشیطٰن الرجیم
بسم اللہ الرحمٰن الرحیم
The Holy Qur'an is the Sacred Book of the Muslims unanimously, that was revealed to the Last Messenger Muhammad (May Allah shower His blessings and peace on him). This blog is dedicated to deliver the Message of the Qur'an to the modern world in the English language. Every translation and interpretation shows the understandings of the text that the translator or interpreter concludes from his study of the Qur'an. This is also true for the translation and interpretation, that is presented on this blog Qur'anic Academics. On this blog Sajid Mahmood Ansari is translating and interpreting the Quranic narratives in the light of the best interpretation of the Qur'an---Authentic Hadiths (Prophetic Traditions) through a rationalist approach. The Holy Qur'an demands a rationalist approach to comprehend its meanings. Allah Almighty says:
"And those who, when reminded of the Ayat (verses) of their Lord, do not fall upon them deaf and blind."[25:73]
Then do they not reflect upon the Qur'an, or are there locks upon [their] hearts? [47:24]
Though he has focused on exoteric meanings generally, however, esoteric meanings are also mentioned if necessary.
Qiraat Sab'ah (Seven Canonical Recitations of the Holy Qur'an) have been transmitted through numerous successive chains and considered Mutawatir by the Muslim scholarship. However, there are slight differences of eloquence,short and long vowel sounds, stress and softness of the consonants. These differences in Qiraat cause slight and tolerable differences in meanings as well.On, this page, the Qiraat transmitted through Ali bin Abi Talib (peace be upon him) has been adopted.  For conforming with standard English in translation, Sajid Mahmood Ansari has adopted the syntax of Muhammad Asad's translation, that is considered an exceptional work in the West. Muhammad Asad (ex Leopold Weiss) [12 July 1900 – 20 February 1992] was an Austro-Hungarian-born Muslim journalist and scholar, who converted to Islam from Judaism in 1926. His famous best selling autobiography 'The Road to Makkah' won great fame for him.

However, Asad's translation has not been copied here as it is, instead, on many places certain amendments have been induced to conform with Ali's Qirat and authentic Hadiths.
We seek refuge in Allah Almighty from Satanic inspirations and ask for His help to complete this translation. Ameen
We request all the scholars to oversee this translation and notes carefully and guide me if they find any mistake please!